Yellow fever is an acute viral infectious disease, which was once much-feared, especially in seaport areas. The spread and effects of the disease are now limited to certain tropical areas that lack an adequate health prevention system, or that do not have active vaccination measures in place. This could be because it was thought that the disease could not reach or even return to these areas.

The disease is caused by a Flavivirus from the Flaviviridae family (the names derive form the Latin word flavus which means "yellow", hence the name of the disease). The disease can spread in three different cycles: the forest or sylvatic cycle, the intermediate cycle (only in Africa), and the urban cycle. The first is the original enzootic cycle which involves mosquito vectors typical of tropical forests (Aedes africanus on the continent of which it beholds its name, Haemagogus janthinomys, H. leucocelaenus, Sabetes chloropterus in Central and south America) and as hosts in various species of monkey.

Transmission can occur when a human goes to the jungle and is bitten by an infected mosquito (belonging to the different species mentioned previously). It can also occur in an intermediate cycle (only in Africa) that is called savanna cycle too; this transmission is brought about by other species belonging to the genus Aedes.

Finally, the urban cycle can be triggered when an infected person returns to an area where the fearsome Ae. aegypti is present as a vector. The Ae. aegypti is native to Africa, but widespread in most of the equatorial and tropical regions, and in some of the warmer areas of temperate ones. In the Americas, transmission can take place at altitudes of up to 2,300 m above sea level, while in Africa even at higher altitudes. 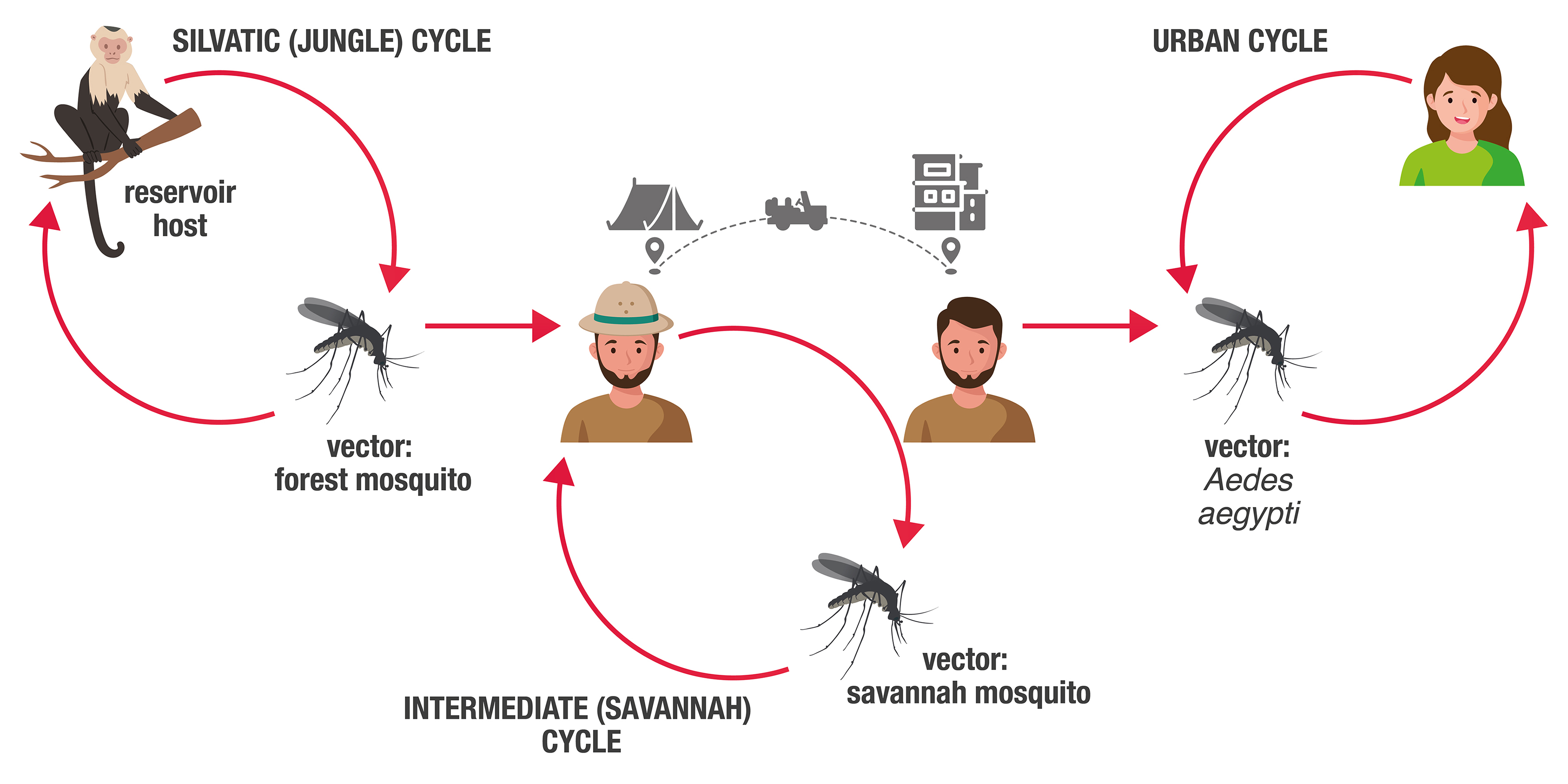 SYMPTOMS AND COURSE OF THE DISEASE

The disease can manifest with different levels of severity and in 60% of cases, the infection is asymptomatic. In other cases, the first symptoms of the disease usually appear 3-6 days after infection.

In mild manifestations (the majority), there is an increase in fever, while in more acute ones, after severe generalized pain in the first phase, a period of remission lasting a few hours or even days then follows. Thereafter, a phase of intoxication involving skin and internal hemorrhages, liver symptoms (jaundice, hence the name "Yellow Fever"), urinary tract (kidney failure), and shock all start to manifest. On average, deaths occur in 20% of severe cases, although in some epidemics, it has stopped at 5% and in others it has reached 80%. 50% of toxic patients die, usually within two weeks of the onset of symptoms.

Mortality is higher in younger people.

Unfavorable prognostic signs are the early appearance and severity of jaundice (day 3) and the increase in transaminases.

There is no specific treatment for yellow fever. However, the anti-amaryllis 17D vaccine (also known as YF-Vax) is available and has proven highly effective. Just one dose of this live, attenuated viral strain, provides immunity of at least 10 years; this becomes effective from the 10th day following the vaccination.

Therefore, a vaccination is strongly recommended (in some places mandatory) as a preventative measure for travelers and for those living in endemic countries. The vaccination is approximately 100% effective, while the incidence of fatal cases from the disease is greater than 60% in non-immunized adults. Tolerance to the current vaccine is excellent. The only contradiction to its use, apart from real allergies to egg proteins, is cellular immunodeficiency (congenital or acquired).

After overcoming the overt infection or disease, the affected individual acquires a lifelong immunity.