West Nile term refers to two different diseases, which are caused by the same agent. These are the West Nile Fever (WNF) and the homonymous neuroinvasive disease, known as the West Nile Neuro Disease (WNND).

These diseases are caused by a single virus that is also known as West Nile Virus (WNV); they belong to the Flaviviridae family. In 1937 in the West Nile District (hence the name of the disease) in Uganda, a woman had febrile symptoms and from her blood sample, the disease was first isolated. WND is closely related to the viruses that cause dengue, yellow fever, Zika and Japanese encephalitis.

WNV is maintained in nature by a primary cycle of mosquito-bird-mosquito transmission (endemic cycle); adult ornithophilous mosquitoes (vectors) become infected by biting viremic birds (amplifying hosts). Once ingested, WNV can spread throughout the mosquito’s organism, where it multiplies and localizes in the salivary glands to then be transmitted to the vertebrate host.

Humans, Equidae, and other mammals are "dead end" hosts. This means that they do not develop a high level of the virus in their bloodstream and cannot pass it on to other biting mosquitoes; therefore, the transmission cycle is unable to perpetuate itself.

One of the peculiarities of this Flavivirus is the possibility of being transmitted by different genera and species of mosquitoes. The main competent vectors are some of the ornithophilous mosquito species, which belong to the Culex genus, and are always strongly associated with the transmission of the WNV during outbreaks. In Europe, the virus has been isolated in eight species of mosquitoes; the main vectors are Cx. pipiens, Cx. modestus, and Coquillettidia richiardii.

Cx. pipiens is generally considered to be the main vector of the WNV in Europe. Mosquitoes are inactive during the cold months. However, the ability of the virus to survive during this period has been demonstrated in infected mosquitoes that are able to survive the winter by virtue of enclosed structures.

In addition to mosquitoes, other sources of transmission documented in humans, although much rarer, are organ transplants, blood transfusions, and transmission from mother to fetus in pregnancy. For this reason, when the virus is discovered in a province, in mosquitoes, birds, horses, or men, blood and organ donations are subject to special checks (see the 2021 West Nile Virus page from the National Blood Centre for updates). 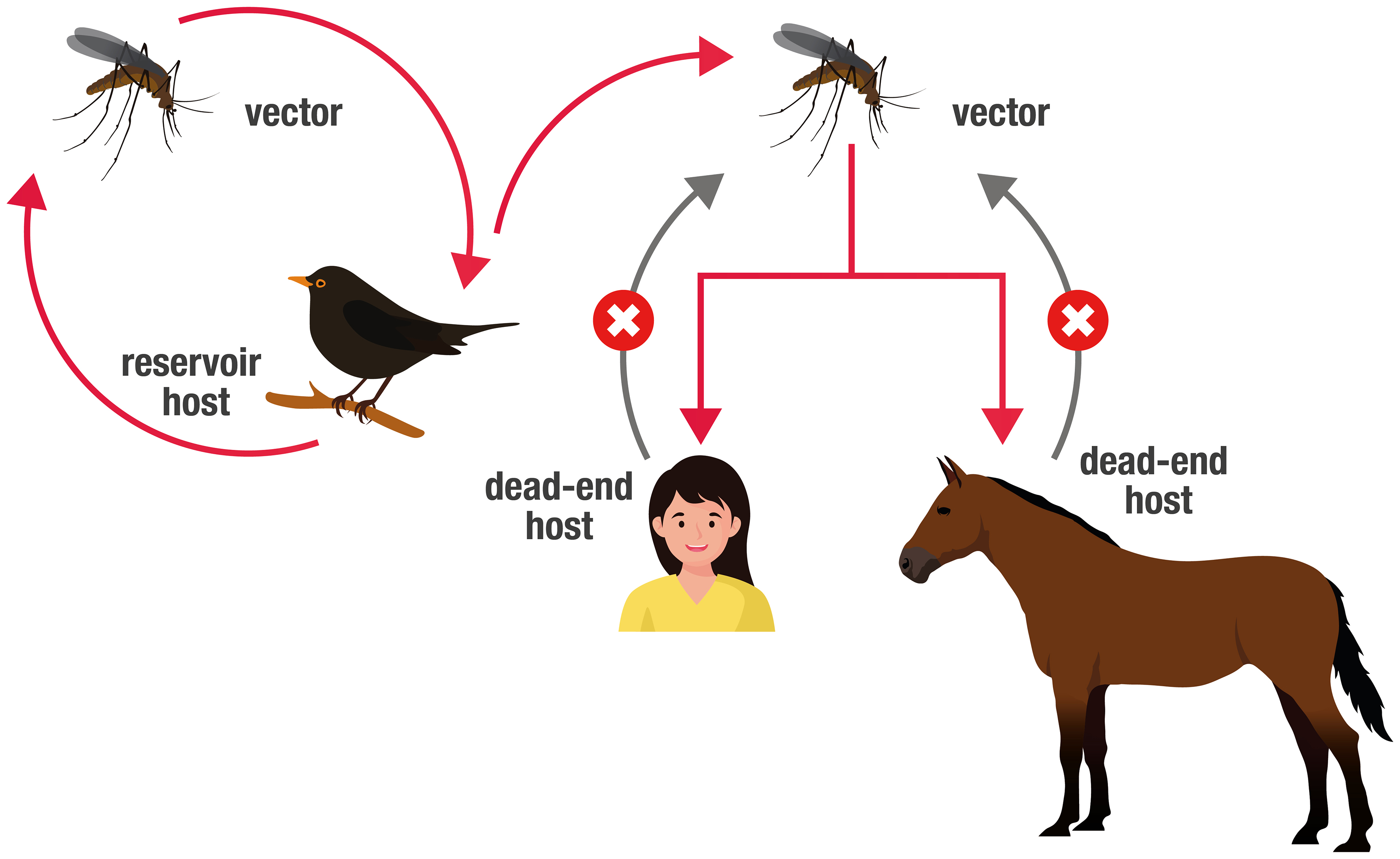 SYMPTOMS AND COURSE OF THE DISEASE

The disease is asymptomatic in 80% of cases in humans. Symptoms, when present, are similar to those of the flu and consist of fever, headache, lymphadenopathy, gastrointestinal symptoms (nausea, vomiting, diarrhea), muscle and joint pain, dyspnea, and a rash.

The most common symptomatic forms appear after an incubation period ranging from 2 to 14 days (up to 21 in the immunosuppressed).

Generally, the acute phase of the disease resolves in a week, but a state of weakness can persist for a long time.

Mortality (less than 0.1% of total infections) is more frequent in elderly people and in people with impaired immune systems.

Equidae (in European horses, donkeys, and mules) and humans are terminal hosts of the infection; they do not develop such a viremia as to infect vectors (mosquitoes) nor consequently contribute to the continuation of the transmission cycle. In humans and even Equidae, most infections proceed asymptomatically. However, in the outbreaks observed in recent years, an increase in the percentage of subjects with symptoms has been recorded (about 10% of infected animals).

In horses, the incubation period ranges from 3 to 15 days. Clinical symptoms are fever, ataxia, proprioceptive deficits, paralysis of one or more limbs with the consequent inability of the animal to maintain a quadrupedal position, skin fasciculations, tremors and muscle stiffness, and sometimes dysmetria, drowsiness, hyperexcitability or aggression, hyperesthesia, paresis facial muscles, tongue, and dysphagia. Clinical signs may resolve with healing in 5 – 15 days, or progress quickly resulting in death of the subject. The lethality rates range from 15 to 60% depending on the epidemics. In some cases, euthanasia is preferred. The central nervous system has lesions that are only visible at the microscopic level.

There is currently no specific therapy or vaccination for human use. Supportive therapy is the only means of treatment. Antipyretics, anti-inflammatories, hydration, and rest can be helpful for West Nile Fever. However, for the neuroinvasive disease (WNND), hospitalization is required where the treatments administered include intravenous fluids and assisted breathing.

Prevention consists in protecting yourself from bites and preventing mosquitoes from reproducing easily.

Therefore, adhering to the following steps is strongly advised: