In the Culicidae family, larvae have very evident peculiarities that allow them to be easily distinguished from those of other families. First, as with all Diptera, the larvae are apods (without legs). Like many Nematocera, the head is easily distinguished, a part of the body that is not overly evident in the larva of other Diptera. Among the aquatic larvae of Nematocera, only mosquitoes have thoracic segments that are strongly dilated compared to the abdominal ones; they are also fused into a single roundish block. Other distinctive features include the head that is clearly distinct from the thorax, and the absence of adhesive disks and pseudopodia on the abdominal segments. They are also easily distinguished from the Caoborids, the family that is systemically closest to the Culicidae, for having non-transparent integuments, a body without hydrostatic vesicles, and a head without raptorial antennae (specialized for capturing prey).

Mosquito larvae can measure from less than a millimeter (first stage) to just over a centimeter (fourth stage).

Their body is divided into three principal parts: the head, the thorax, and the abdomen.

The relatively globular structure of the head is weakly sclerotized (cephalic capsule) and is dorsoventrally flattened. The antennae originate from the sides of the head and bears six setae which can be simple or with multiple branches. The head bears up to 18 symmetrically paired setae. Some of them (inner, outer and post clypeal setae, outer, median and inner frontal setae) are of diagnostic importance and used for identification in the keys. They provide their diagnostic indication not only by their relative position but also by their length, degree of branching and other characteristics. Mosquito larvae have a biting and chewing type of mouth; besides the labrum, the larval mouthparts consist of two pairs of flattened sclerites, the mandibles and maxillae and the mentum (labium). The maxillary palps arise close to the base of each maxilla. Two pairs of eyes are situated laterally: the dark crescent shaped anterior ones are the primordial compound eyes of the future adult showing through the larval skin, while the smaller simple larval eyes (stemmata) are located just behind them.

The thorax is substantially divided into three segments but appears as a single globular structure with notable setae.

The abdomen consists of nine apparent segments (actually ten, but segment IX is rudimental) which are denoted in Roman numerals; the latter ones include parts of the remaining embryonic segments. Each segment bears up to fifteen pairs of setae, some of which are used in taxonomy.

In anophelines, there are multifidus setae with strongly dilated branches on the II and VII segments, these are called palmate setae due to their appearance. In contrast, in the majority of Culicine mosquitoes, one or more rows of spicules are present, which are found on the central distal region of each side of the eighth segment.

On the segment X of both the anophelines and culicines, there is a large sclerite, like a saddle, which covers most of the dorsal and lateral surfaces. In some species, the sclerite is fused ventrally to form a complete ring. Various pairs of setae are arranged on the same segment, some grouped together in the so-called ventral and dorsal brushes, whereas others are well-separated, such as the caudal setae.

Culicines bear a sclerified tubular and cylindrical organ called the siphon, found on the eighth dorsal segment. There are spiracles fused on the apex that the larva uses as a breathing tube for atmospheric air. Anophelines do not bear a real siphon, so they breathe through a homologous spiracular plate while lying parallel to the water surface. 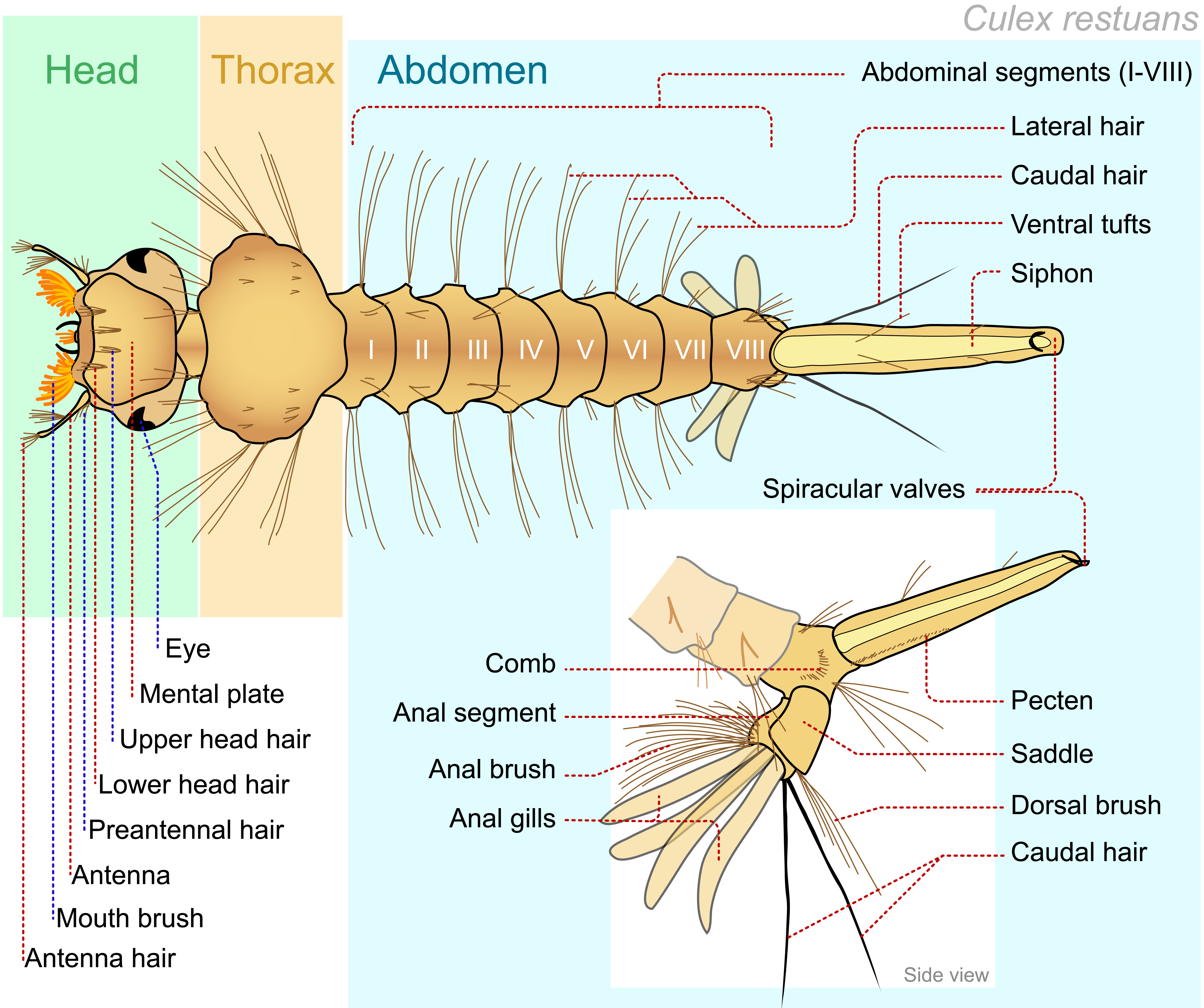 The adult mosquito is a fragile-looking insect with a sharp abdomen and long, thin legs. The dimensions vary from a few millimeters to more than a centimeter. There are three main parts to every adult mosquito: the head, the thorax, and the abdomen.

Two large eyes made up of hundreds of ommatidia cover most of the head. The frontal part of the head, between the eyes, bears a pair of antennae. There are fifteen segments to the antennae that are called flagellomeres (the first, called scape, is collar-shaped and hidden behind the second one, called pedicel, that is subspherical and contains the Johnston’s organ, a mechano- and sound-receptor; the remaining 13 segments are elongated and are covered in setae with chemical and mechanical receptors), a pair of relatively long maxillary palps (also referred to as palps), and the proboscis.

The palps and antennae are more developed in the male and are the main sensory organ of the insect. In the females, the length of the palps allows for us to distinguish culicines, which have much smaller palps compared to the anophelines, whose palps are roughly as long as the proboscis.

The latter appears to be a single structure, but it is made up of various modified and elongated mouth parts (labroepipharynx, mandibles, maxilla, hypopharynx), held together at their resting position by the labium.

When biting into its victim, the sharp parts (stylets) penetrate the skin, while the labium is looped backwards and does not penetrate the host tissue.

The stylets move in different directions in the skin and then puncture a capillary so that the mosquito can suck the blood. In males, which do not suck blood, the proboscis is distinguished by the absence or reduction of the mandibles and maxilla. The head and palps are covered with scales that help differentiate the species.

As in all insects, the thorax is divided into three main parts (pro-, meso-, and meta-thorax), but in mosquitoes, the mesothorax is what it is predominately made up of. The thorax bears a pair of wings (on the mesothorax), a pair of halteres. (of metathoracic origin), three pairs of legs (one pair on each of the thoracic segment and referred to as fore legs, mid legs and hind legs), and two respiratory spiracles on each side.

The legs are articulated. Each leg consists of various segments, the coxa, trochanter (in the shape of a small ring), femur, tibia, tarsus (subdivided into five tarsomeres) and a pair of small claws or ungues (pretarsus), of various shapes and forms, and in some cases, there are other useful characteristics that the mosquito uses in order attach itself to support surfaces (pulvilli). The scaling of the legs is a useful characteristic when determining the species.

The halteres, which are relatively club-like in shape, are sense organs which control the equilibrium during flight. They derive from a second pair of wings (metathoracic wings) which are absent in all Diptera (whose name indicates the presence of only two wings).

The thorax is also covered with setae that are often massed in groups and have colored scales that help distinguish the species.

The abdomen has an elongated cylindrical shape and is divided into ten segments that are called urites. Seven or eight urites are clearly visible; however, the last two are part of the genital area and have colored scales that form characteristic designs for many species. The II and VII segments bear a pair of abdominal spiracles on each side (pleura).

Segment IX is reduced to less than a third of the size of the preceding segment and bears the rest of the postgenital segments, the proctiger (epiproct and paraprocts), and the cerci, which support oviposition. The terminal segments of the male abdomen are greatly modified for mating and are of value in identification of the species. 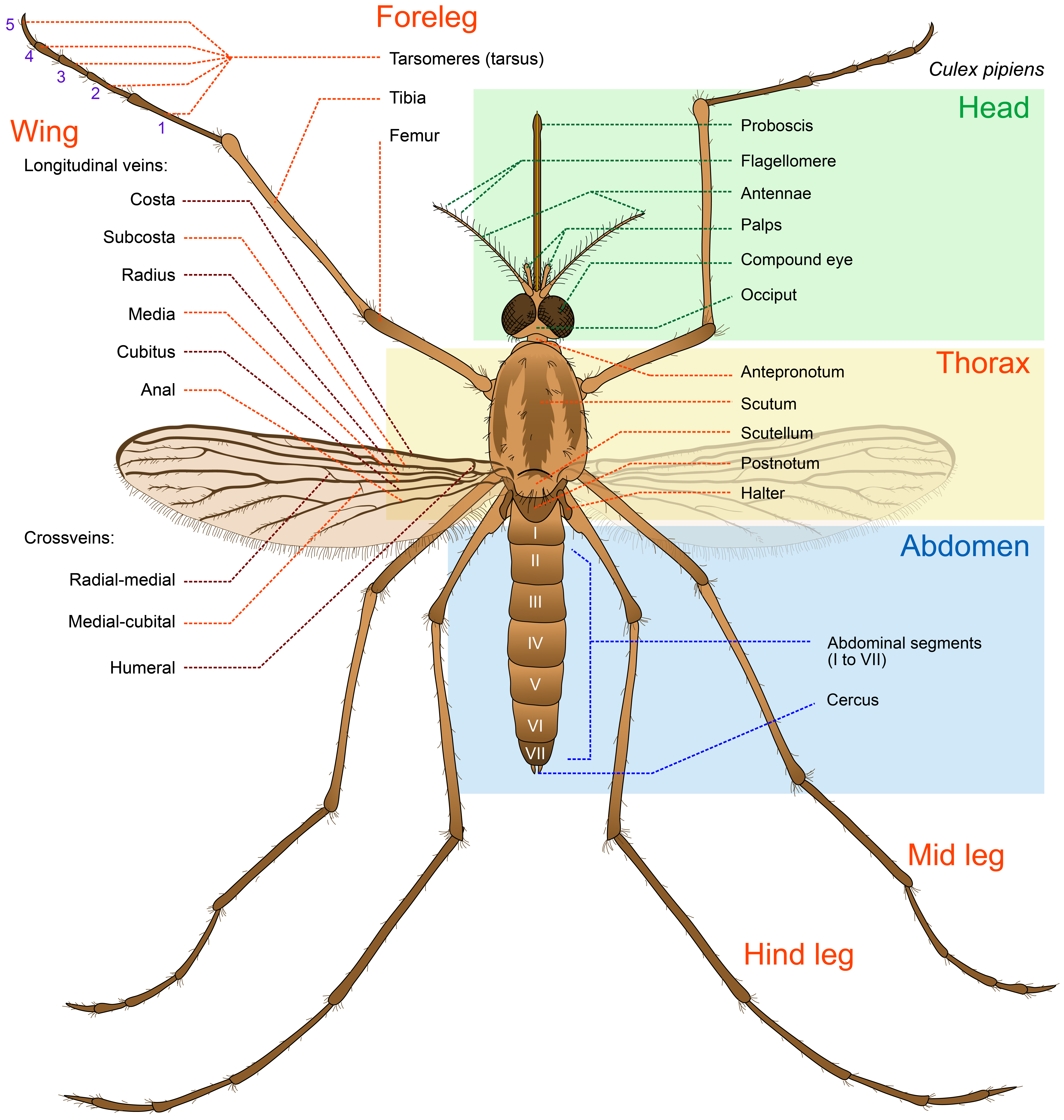